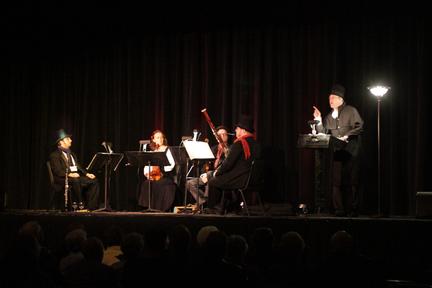 from our listeners and

"I had the opportunity to see Flower & Flame perform their adaptation of “Christmas Carol” in December in Burke, South Dakota.  I assumed I would enjoy the performance, but I couldn’t have imagined the talent that I was to see!  It truly was an other-worldly experience, which captivated the audience through and through.  The instrumental talent alone carried us away, and the brilliant narration was more than mere “frosting on the cake.”  It was a magical night that set the stage for the holidays perfectly.  The talented musicians played to a packed house in our small town, and the community absolutely gushed about the performance afterward.  People are STILL talking about it!  It is a joy to behold such talent here in Small Town, South Dakota.  I have been blessed to have enjoyed musical performances on Broadway in NYC; in Tampa, FL; in Chicago; in Sydney, Australia; in L.A.; in Toronto; in San Francisco; just to name a few.  Flower & Flame have such talent and expertise in only four musicians that they rival each of the performances I’ve seen anywhere in major metropolitan areas.  I look forward to my next opportunity to see them – it can’t come too soon!
— Pamela G. Osnes, Ph.D.

"We have brought the Flower and Flame group to Watertown on a couple of occasions, the most recent being in December 2014 for a performance of "A Christmas Carol." The performance was attended by about 150 people and exceptionally received. We plan to bring the group back again as often as possible because of the unique musical format that it employs. We have no doubt that the next performance will have even greater attendance. Grant support by the SD Arts Council makes it easier for those of us who work with a limited local budget to bring great artistic talent to our community."

"Congratulations and a tip of the hat to the VFW and Commander Jim Osnes for bringing a real Christmas treasure to Burke when he was able to secure “Flower & Flame,” truly a South Dakota treasure. It was one of the most memorable evenings this writer and the better half has had in a long time. Everyone who was fortunate enough to attend the presentation was simply in awe."

The Flower and Flame concert is always the highlight of our Labor Day weekend!" - Dave and De Knudson