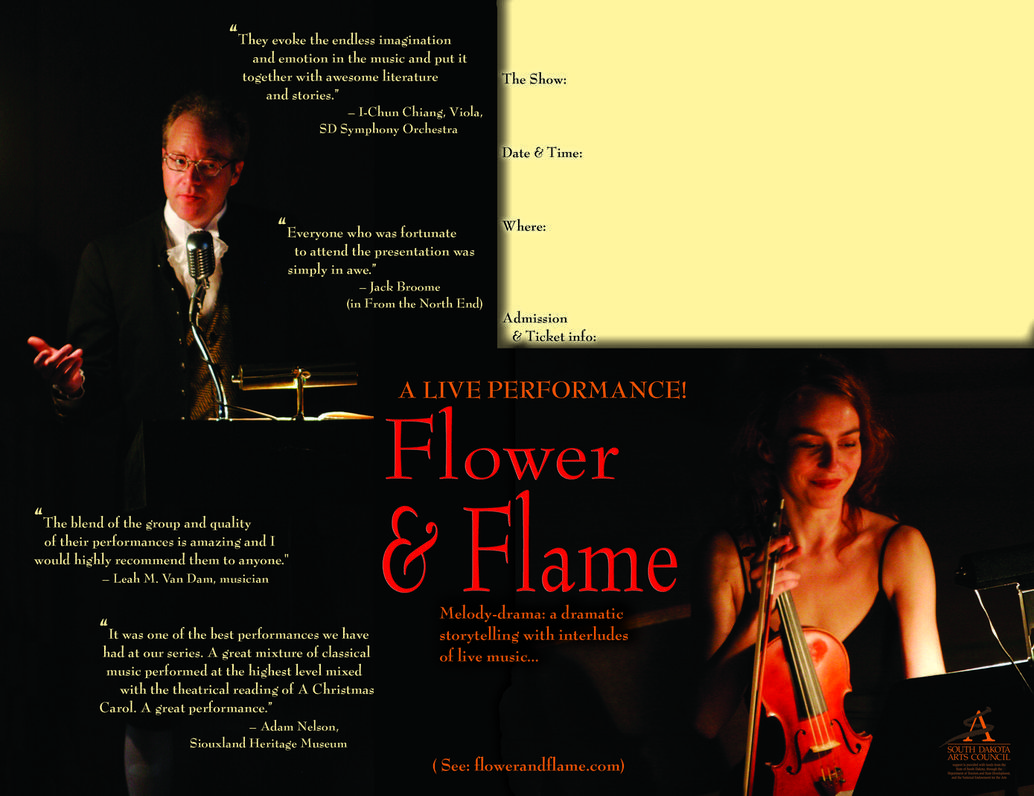 All photos on the website are approved and downloadable for promotional purposes. Please email us for specific image requests.

Here is a sample press release. Cut, paste, and adapt!

Sioux Falls, South Dakota—August 19, 2009— Flower and Flame is on its way to the Opera House. The theme for this concert is A Nightly Magic—Classical Sounds & Hans Christian Andersen. The concept of the show is an old one: it is a true melody drama, in which music and words take equal part in the presentation. The pilot performance took place on Tuesday the 14th in Yankton, SD, and met an excellent response from the audience. “We were really touched by the reaction,” says Darrel Fickbohm, the actor and adapter of the script. “The show ran along, and although it's for adults, even the kids that were there sat mesmerized the whole time. You never know on something like this, how things will go. It’s an antique concept that may or may not work out for you—it worked out really well. The mix of stories and music pretty much reeled in everyone, young and old.” Magdalena Modzelewska, founder of the group, was born in Poland. She started playing the violin at the age of six and attended schools designed for career oriented young artists. She received her Master’s degree in violin performance in 1997 from the Music Academy in Wroclaw, Poland, and after being a part of different projects in Germany, Poland, France, Switzerland and England, she emigrated to the US, where, since 1998, she’s held a position with the South Dakota Symphony Orchestra and the Dakota String Quartet. In 2002 Magdalena Modzelewska created her own original musical project called Flower and Flame. It has performed every year since then. The international quality of the group was a happy accident that became a tradition. Several flavors and schools of musical philosophy are added to the music itself that make the performances unique. There are players from Russia, Poland and the USA, all bringing their own perspectives on the music. “When you listen to music you can’t always put your finger on what is going on. You just know that something different is coming out and it’s like experiencing a new flavor,” says Fickbohm. “I think the greatest thing that can happen to anyone, musically, is when they start to notice that something is changing in the way they listen—acquiring a new taste. This happened to me in the rehearsal process for this show, and I can’t wait to get on the stage again and share it.” Magdalena tells of how the new show began to develop: “It is amazing how much of our best music lends itself to storytelling. In fact, it is storytelling. This year I was reading a new translation of Hans Christian Andersen’s fairy tales. I remembered my grandmother telling me some of these stories when I was a child in Poland, but I hadn’t yet read them as an adult. I was amazed at how great they were for a grown up person, too. As I was reading them, I started to imagine an evening full of the same weird beauty and strangeness that I was picking up from the stories. I began working with an actor, (also something new for us), and came up with a dramatic show that aims to capture some of that magic bedtime feeling. We even use stand up floor lamps and an old-time parlor carpet. Some people from the first audience in Yankton told us that they felt like they were transported to their grandmother’s sitting rooms for a story.”Music lovers in Wessington Springs can catch the performance Saturday September 19th at 2 pm. At the 1905 Opera House. The players: Violin, Magdalena Modzelewska,

For further information, or to schedule an interview with Magdalena or Darrel, please email: info@sio.midco.net • See attachments for safe jpeg images of: Flower and Flame and other graphics • South Dakota Arts Council support is provided with funds from the state of South Dakota, through the Department of Tourism and State Development, and the National Endowment for the Arts.